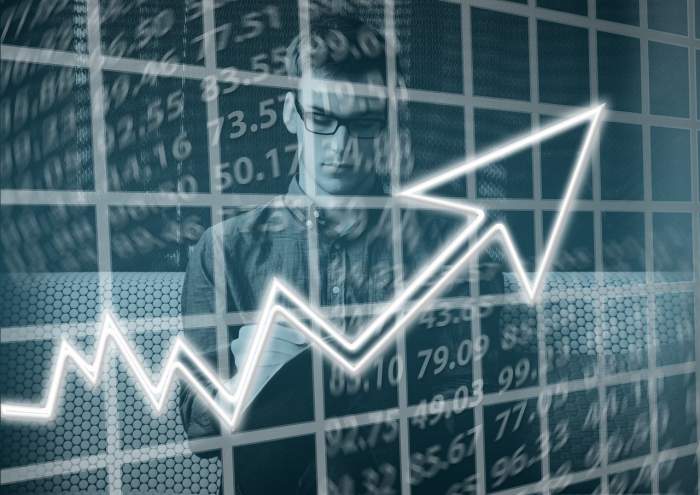 The name for “renko charts” originates from the Japanese word renga, meaning bricks. Unlike bar or line charts, where data points are discrete points at a specific moment in time (using price and time as data points), in a Renko chart, price movement is used as the data point.

There are a few more quirks when it comes to Renko charts, so see below for a brief guide on how they work.

Renko charts are made up of “bricks” that are placed at 45-degree angles from each other up or down. Bricks have a predetermined, consistent size/value, such as $0.25, $1.00, $10.00, etc, which will be the stock value at the close of the market over a chosen period of time.

Renko charts can also be based on something called an average true range (ATR), which is an average value over a specific period of time, usually two weeks. Charts of this type use a fluctuating ATR value to determine the size of the brick.

Renko charts, unlike more typical bar charts, have an unfixed timeline. That is to say, the placement of the data points is based on the movement of stock value, not time. If a brick is worth $1.00, another brick is not placed on the chart until the weekly stock value changes to $1.00 higher or lower the trading value. Green or white bricks indicate an upward trend in value, while red or black indicate a lower trend.

This type of charting paints a true trend of the movement and not the sharp movements seen when data is plotted on specific and consistent time intervals. By basing the chart on longer periods of time such as weekly changes, the line is smoothed and there is less “noise”.

By filtering out this noise or small movements, it is believed to make it easier to spot trends worthy of the trader taking action. In other words, a single downtick represents movement at the end of two weeks, but does not tell you what happened during the two weeks leading up to that brick’s data point.

So it is clearly a disadvantage of Renko charting that some stock pricing information gets lost when only capturing data once a week, rather than daily. That is why it’s always best to use other data analysis methods alongside Renko charts, and even to apply stop loss mechanisms for added protection against volatility.

Developing a Renko chart starts by determining the brick size that best indicates the movement of the stock pricing. For example, the brick size may be determined to be $1.00. A brick is placed at a 45-degree angle up or down from the previous brick only after the stock value goes up or down by one full dollar.

Logically, increasing or decreasing the size of the bricks impacts how smooth the Renko chart line appears. The smaller brick size will show smaller movements or swings, but it may also give earlier indications of price changes. Larger bricks make for smoother charts, but they will not provide a signal of price changing as quickly.

A simple example of how you might use a Renko chart would be if you had a strong upward trend of stock value represented by a line of green bricks climbing steadily upward, and a sudden but brief downward change in direction represented by a red brick, followed then by another upward trend.

Keeping in mind that if each brick represents two weeks of market activity for that stock, the upward tick may be an indication to buy. Then, when you see another downtick (red brick) it may be time to pull back. The opposite of this scenario is also possible, by going in short when you see a downward trend and then long when you see the uptick reversal.
Renko charts are excellent tools for any trader to have in their arsenal, but should always be used in concert with other stock management methodologies such as the Automatic 1-2-3 Trend Indicator, to mitigate risk.